The Making of MGA

a rich history that spans generations

MGA Gymnastics has a rich family history that spans generations. From its humble beginnings as a dance studio in Bowie, MD to multiple gymnastics centers across multiple states, this is the story of the passion and dedication of the Shrewsbury and Tichenor families to have a positive impact on the lives of kids.

where it all began

Our story begins with a bit of a child prodigy in the 1950's. Early on in her childhood, it was clear that Carolyn Shrewsbury (born Carolyn Brown) had a natural ability for acrobatics. Her amazing flexibility and incredible balance helped her perform incredible feats that were unheard of at the time. Some of her performances included taking a stack of blocks one at a time up a spiraling staircase and stacking them back up, one on top of the other - all while in a handstand. She performed various acts involving extreme flexibility, and others of one arm handstands or balancing on nothing but her head, on a tiny platform - on top of a pole, on top of another platform while it spun around in circles.
Performances like these garnered much attention and led Carolyn to receive invitations on The Howdy Doody Show, The Bozo the Clown Show, and even the Mickey Mouse Club! Later she would have a spot in Atlantic City, performing next to the infamous Steel Pier Diving Horse.

Carolyn later attended college at the University of Maryland College Park, where she met her future husband, Jerry Shrewsbury. Jerry ended up falling in love not only with Carolyn but also with acrobatics, and the two ended up performing together in the college's new acrobatics performance team, GymKana. After college, they later married. Then in 1964, after the birth of their first child, Lora Jean, they opened Carolyn and Jerry's School of Dance in Bowie, MD where they taught a variety of dance disciplines along with acrobatics. Five years later, they welcomed their son Brian into the world.

Carolyn and Jerry's love for acrobatics continued to grow, and in 1973 they opened Royal T's Gymnastics in Crofton, MD. Though it would undergo a few name and location changes, this would become what is today the longest-running gymnastics center in the state of Maryland, and one of the oldest in the country. Over the next few decades, Carolyn and Jerry would train thousands of children in the sport of gymnastics, including their children Lora Jean and Brian, and elite-level athletes including Racine Williams who became the first African American gymnast at the University of Nebraska.
As Royal T's grew in popularity and drew more and more students, it was soon apparent that the Shrewsbury's gym needed more space. So in 1989, the gym moved to a brand-new warehouse building in Upper Marlboro, MD where it continues to operate today. As the years went by, Jerry and Carolyn's son Brian began to take over more and more coaching, and gradually took over more and more of running the gym. Then in 1996, Brian married Barbara Taylor and Carolyn and Jerry officially passed the torch of Royal T's Gymnastics onto them. Barbara had seven children when they got married, and so Brian adopted the ones who were still children into his life and became their dad.

After purchasing the center, Brian and Barbara Shrewsbury decided it was time to update some things like equipment, programs, as well as the name. Royal T's Gymnastics was renamed Maryland State Gymnastics Center, reflecting its importance as a staple of gymnastics in the state of Maryland. Brian and Barb continued the Shrewsbury tradition that had helped the gym become successful and gave it purpose - to love and care about kids and help them improve their lives through the sport of gymnastics.

Over the next couple of decades, along with thousands of other children, Brian would coach his sons Kellen and Adam up to elite level gymnastics; Barb would coach her daughters Abby, Hayley and Laura through advanced levels; and they would adopt two more children together, Drake and Jibril. Brian coached Kellen for 17 years, from beginning level all the way up through elite level. The two of them traveled around the country competing in hundreds of competitions, often attending competitions in the state of Florida, which was one of their favorite place to go. Together they won lots of state, regional, and national titles. Toward the end of Kellen's gymnastics career, he would even qualify for the National Qualifier at the Olympic Training Center in Colorado Springs. Sadly, and injury just before the competition and then another the following year would prevent Kellen from international competition.

However, all of the lessons the Brian taught Kellen over the years helped him to develop a deep love of the sport, and a passion for helping and teaching kids. Kellen even went on a couple of mission trips to Guatemala, where he did demonstrations of gymnastics and interacted with kids there while they waited in line to receive medications and vitamins. 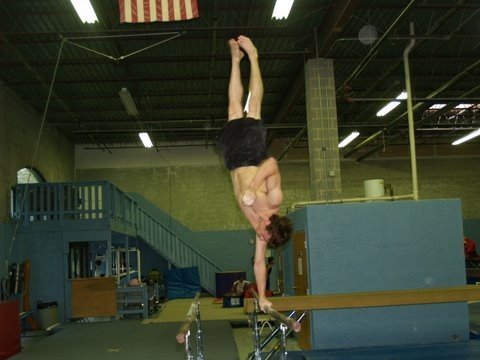 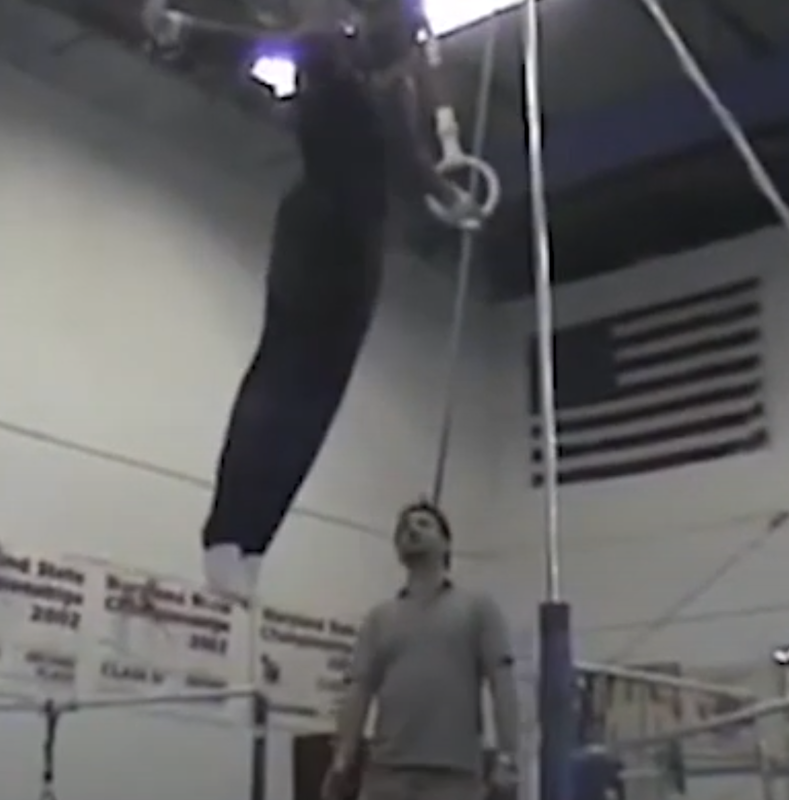 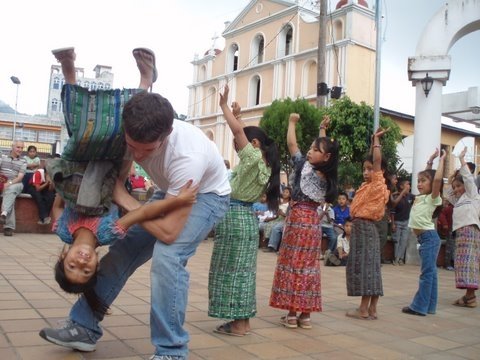 During the time that he trained his children in gymnastics, Brian also was teaching Adam and Kellen how to coach. While Adam will later go off to do other things, Kellen chose to work to continue the family legacy. So Brian taught Kellen how to teach all sorts of skills from beginning to advanced levels, thousands of drills, and also trained him how to spot them all. More importantly, he taught him that kid's well-being always comes first, and the importance of teaching kids values that transcend gymnastics such as goal-setting, overcoming adversity, how to treat others with kindness and respect, and the value of hard work. Brian also taught his kids along the way about the family business; how to do it fairly and treat people with respect, and also the importance of keeping your promises. So by the time that Kellen was ending his gymnastics career, he was just beginning in his career in business. Running the gym together now, Brian, Barb and Kellen were ready for the next chapter in the family journey.

In 2012, with the gym doing well and generating a large following, Brian, Barb and Kellen decided to take a leap of faith and open a second location in Apopka, Florida. Brian, Kellen and Barb took turns traveling down to develop and build the gym, and eventually to begin staffing and running classes. Abby and Hayley would help teach classes as well. The gym was meant to be strictly recreational and catered toward small kids, helping them to learn gymnastics while having fun, and was aptly named "Gym Adventure". The gym was smaller than its Maryland sister location, but lots of love was poured into the gym and the kids there, and it quickly began to grow. 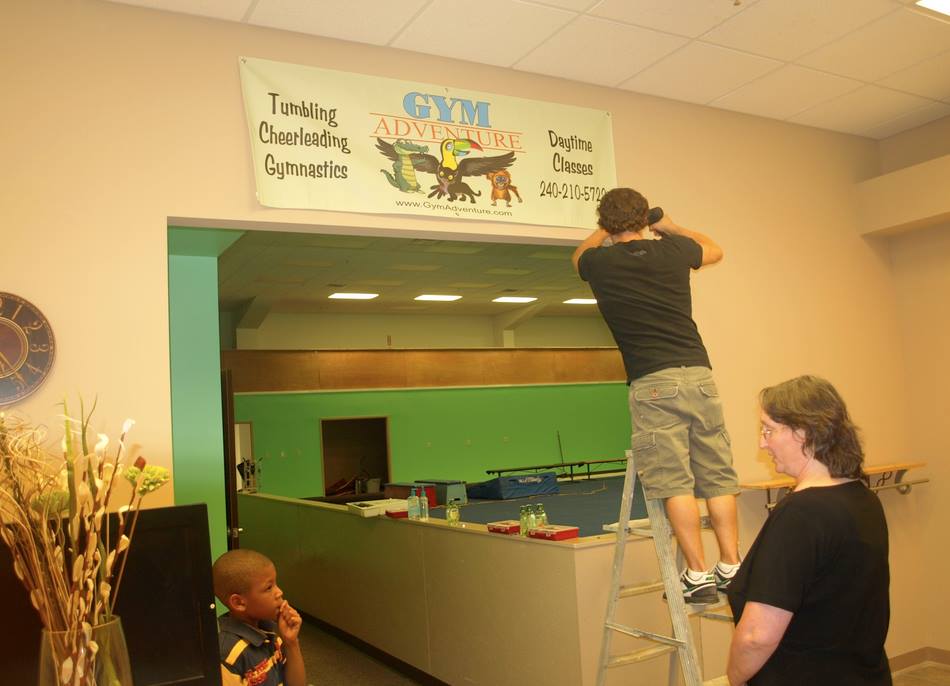 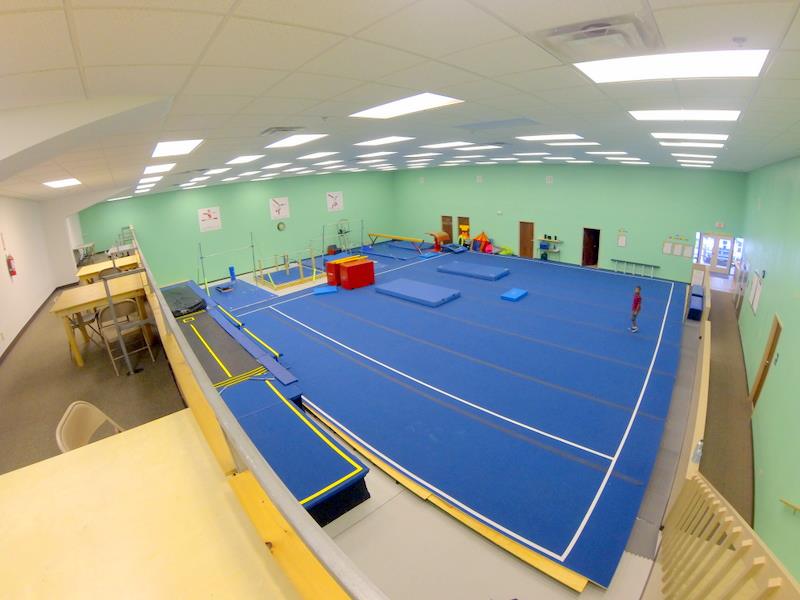 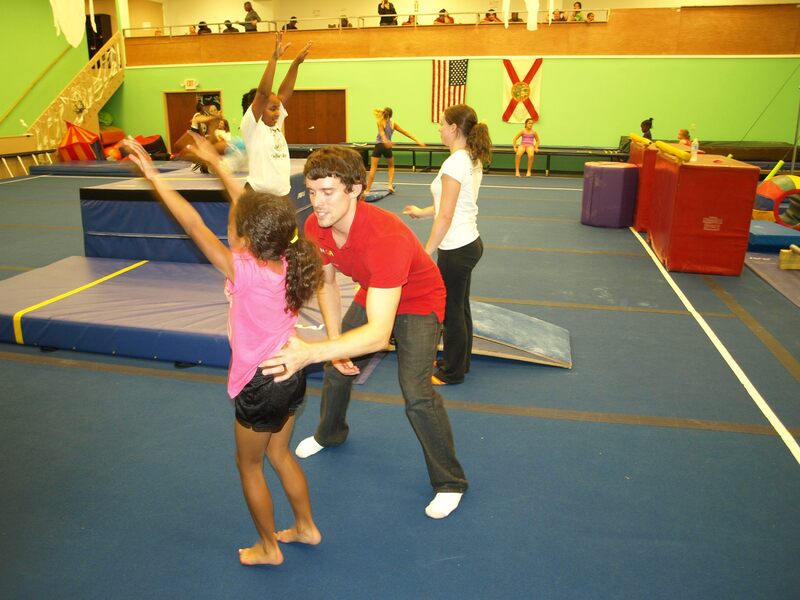 As the word got out in Apopka about Gym Adventure and as it developed a reputation for being a family gym that cared about kids, it started becoming clear that there was a need for such a competitive program as well. More and more families began coming in asking about a competitive team, and so even though the gym didn't really have much space, it was decided to start a competitive team.

As the team grew, and was ready for competition, Brian, Kellen and Barb began to realize that the name "Gym Adventure" didn't really fit for a competitive team. They also wanted a name that would tie the gyms in Maryland and Florida together. The Maryland Gym had begun being known as MD State Gym locally, and they wanted to keep some of the Gym Adventure name as well. So, out of the two names, "MGA" was born - My Gym Adventure. The logo had the Maryland flag embedded in it, and the letter were made of the Maryland colors. 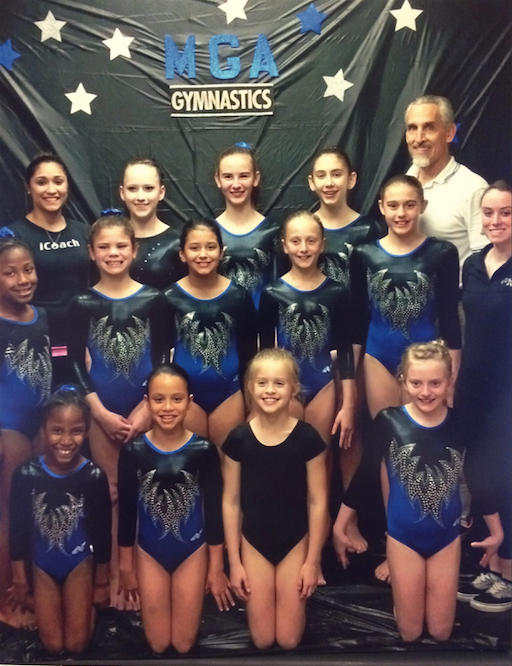 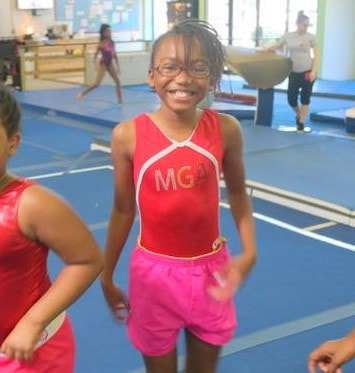 Moving to the sportsplex

Within a few years, MGA in Florida had outgrown the space that it was in. More room was needed for more students, and the team needed more room for the competitive equipment. Thankfully the Shrewsbury/Tichenor family were blessed with a great opportunity when the Coopers who were their landlords came to them and said that they were planning on building a large sports complex right down the street and asked if they would want MGA to be their first tenants. With that, the family accepted the offer and began making preparations for the next big move. They began stockpiling equipment and when the sportsplex went under construction, they worked together to run the Maryland gym and Florida gym, all while building the upcoming gym in the Sportsplex. 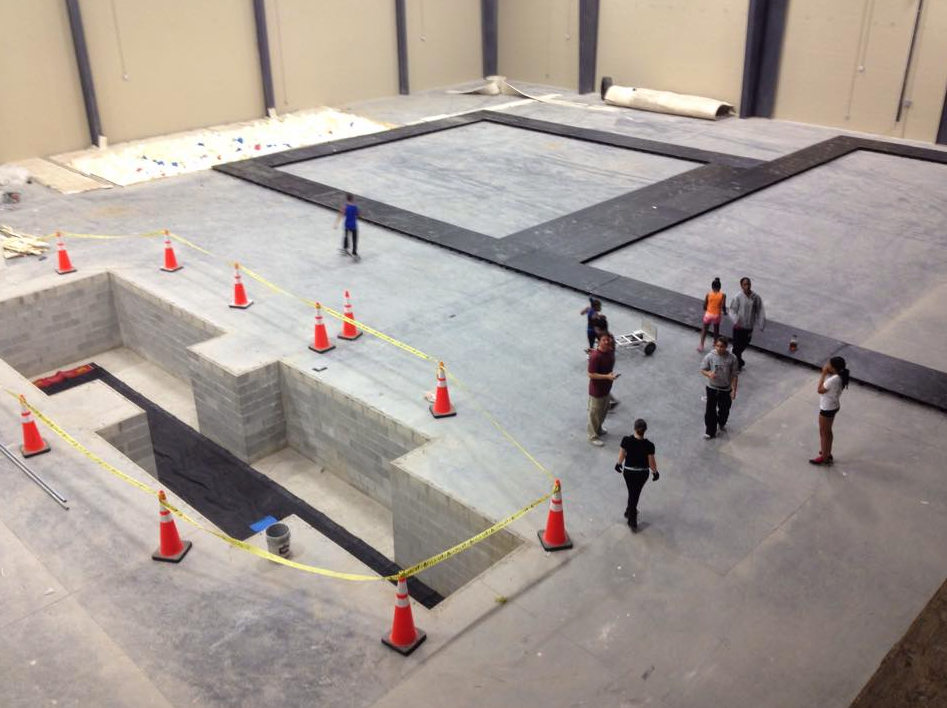 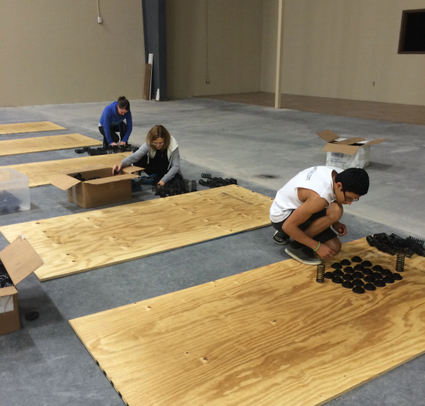 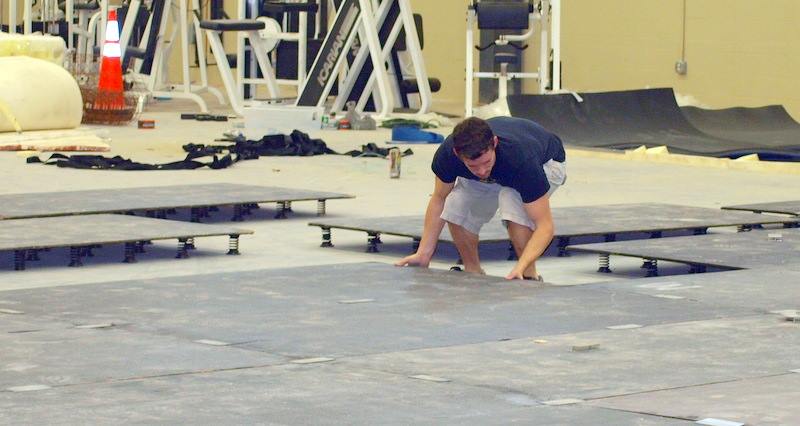 In 2015, MGA in Florida moved into its new home in the Cooper Palms Sportsplex, which is today The Well Activity Center. Since then, MGA has gone through a few logo upgrades, and has expanded into Ninja and T&T in additional to boys and girls gymnastics and continues to constantly upgrade and evolve.

MGA in Florida is now run by Kellen, his wife Jasmine (with whom they have three kids of their own), Brian and Barb. Brian's sister Lora Jean helps manage the gym, and Brian coaches the boys' team with his son Drake. Together with an amazing staff, they help to continue the tradition within the gym of putting the well-being of kids first, teaching them more than just gymnastics, but also giving all children a place to come where they know that they belong. Some of the girls from the very first MGA team in Florida are now coaches themselves, helping to continue to spread love and positivity to the next generation of kids through the sport of gymnastics.

MGA in Maryland is still bustling today, with hundreds of students and families coming through its doors every week. Former students now bring their own children and even grandchildren to have the same experience of acceptance and belonging that they had when they were younger. Annual parties there are like family reunions, where people who have become part of the MGA family over the years can get together and reminisce about the good old days at the gym. MGA remains a staple in the community, where it continues to have a positive impact on the lives of children and their families every day. 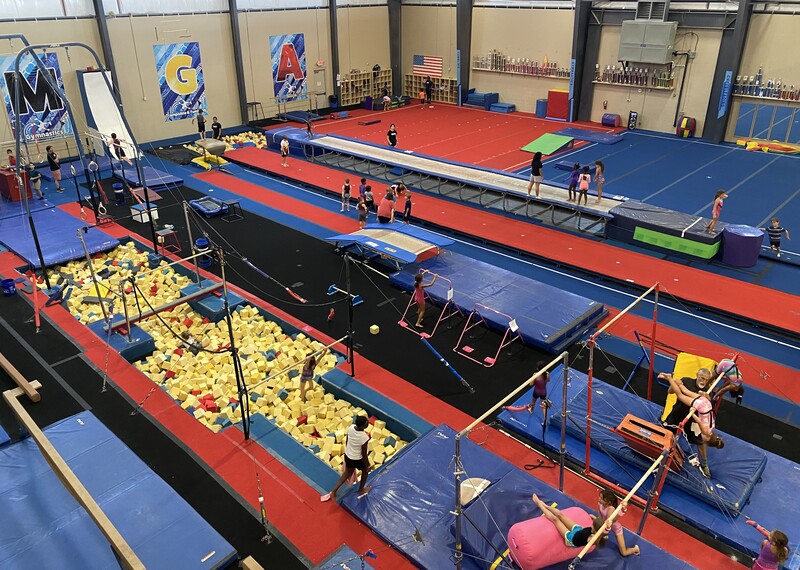 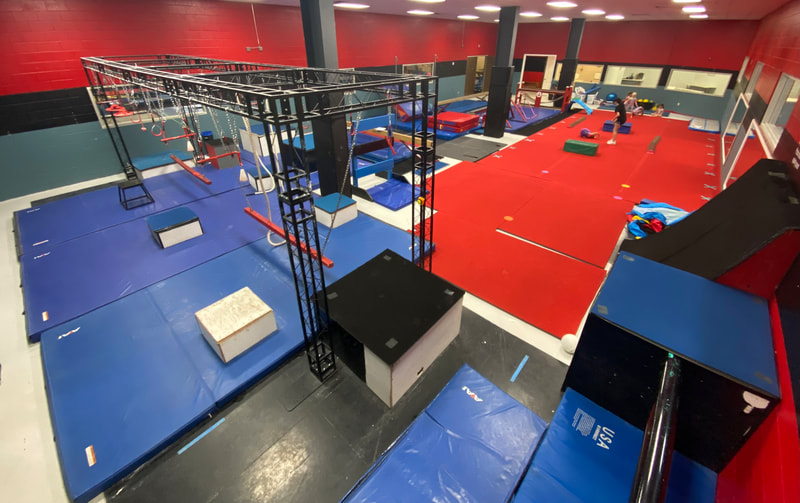 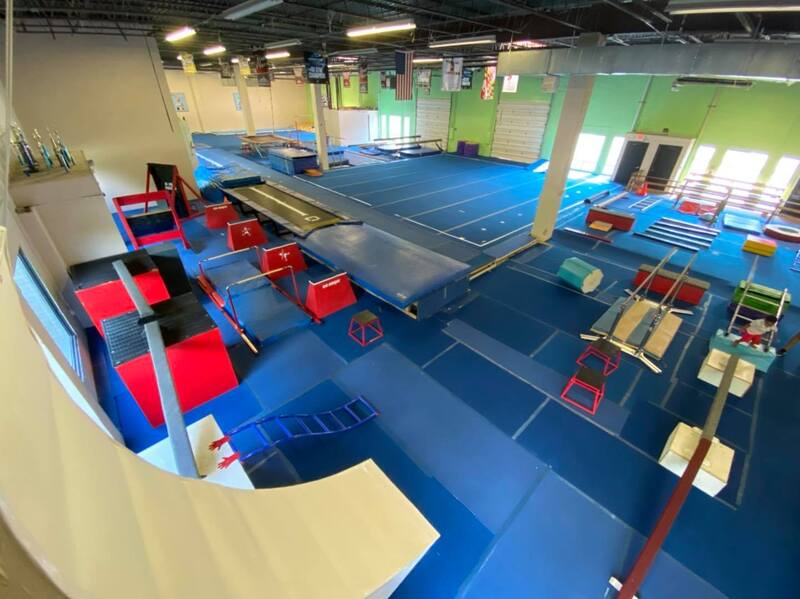 The Shrewsbury and tichenor families today

Carolyn and Jerry Shrewsbury currently live in Florida close to the rest of the Shrewsbury/Tichenor family whom they see every week and have close relationships with. Every once in a while you can catch them at the Florida gym; stopping by and looking out at what has come from the dreams and life's work that were started all those years ago - with a little girl named Carolyn who amazed everyone with her incredible acrobatics and a passion that would spread and continue to grow through generations. A passion that continues today at MGA Gymnastics.